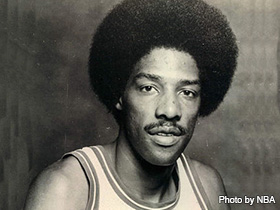 Born in Roosevelt, New York on February 22, 1950, Julius Erving is a celebrated Philadealphia Sixers basketball player, who saw the team to a championship win in 1982-1983. Following his days as a player, he acquired the Philadephia Coca-Cola Bottling Company, becoming an active businessman. He has also contributed his expertese to as a sports analyst and supporting charitable causes during his retirement.

Julius Winfield Erving was born February 22, 1950, in Roosevelt, New York. He and his brother were raised by their mother, Callie, most of their lives because their father, Julius, was killed by a car when Erving was seven. While a student at Roosevelt High School, Erving was a very strong academic scholar and an even stronger basketball player. A natural basketball player, Erving made the All-County and All-Long Island teams in High School. He eventually earned the nickname "Doctor" because of his aspirations to become such, and because of the methodical way he played the game. After high school he continued his basketball career at the University of Massachusetts, where he continued to excel on the court. With two varsity seasons under his belt, Dr. J averaged 26.3 points along with 20.2 rebounds per game. With his performance, he is one of only five players in Mens NCAA Basketball to achieve an average of 20 points and 20 rebounds per game. Eventually, Julius Erving was asked to join the U.S. Olympic team where he began to catch the attention of numerous pro scouts. Erving skipped his senior season at Massachusetts in order to play in the American Basketball Association (ABA). He signed with the Virginia Squires as a free agent and led them to a strong playoff run. At the end of his second season with the Squires, Erving was traded to the New York Nets in order to propel his professional career.

In Erving's first year with the Nets, he was sure not to disappoint. He led them to the league championship, he also led the league in scoring average with 27.9 points per game. He was named the MVP for both regular season as well as the playoffs. Erving began to change the game with his "above the rim" style. He was faster, stronger, and better than everyone else in the NBA. Eventually, Julius Erving ended up on the Philadelphia 76ers where he would eventually end his career. Erving helped the Sixers win a championship in the 1982-1983 season when he hit a shot from the top of the key to give the 76ers a three point lead in the closing seconds to clinch it. For years Erving was the face of the 76ers with his trade mark short afro and high Chuck Taylor Converses. He made the Sixers a strong team and helped them make the playoffs every year he played.

Julius Erving was a class act on and off the court. As Pat Riley said, there may have been some better people off the court, like a few mothers and the Pope, but there was only one Dr. J the player. When Erving was in the last of his playing days he made business investments in the Coca-Cola bottling Company and eventually bought the Philadelphia Coca-Cola Bottling Company. Also, he tried to open a dress shoe store that failed. Julius Erving keeps busy in his days of retirement, he still works with his company, and does work for charitable causes. In 1997, Dr. J was hired by the Orlando Magic as the executive vice-president. He still is influenced by the game of basketball, and the marks that he made on the game will never be forgotten.