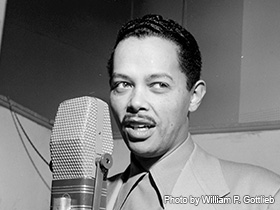 An important bebop vocalist and band leader, Billy Eckstine got his start in Pittsburgh.

Billy Eckstine was an African-American singer who reshaped the boundaries of jazz, bebop, and ballad singing. Born in Pittsburgh on July 8, 1914, William Clarence Eckstein grew up in Washington, D.C. Eckstein attended Armstrong High School, St. Paul Normal and Industrial School, and Howard University. After winning amateur talent shows, Eckstein began to work as a singer in dance bands, the Grand Terrace Orchestra, and later in his own big band. Most famous for his deep tone with a unique vibrato, Eckstine led his own band for four years, went on many tours, acted in several movies, and recorded a large amount of music over the course of his career. Eckstine died in 1993, in Pittsburgh, Pennsylvania.

William Clarence Eckstein was born on July 8, 1914, in the East Liberty neighborhood of Pittsburgh, Pennsylvania, to William and Charlotte Eckstein. Billy Eckstein was the youngest of three children. His father was a chauffeur, who brought a piano home one day because he thought he saw musical talent in one of his two daughters, but the girls showed no interest in music. Eckstein was a talented young singer at the age of seven and entered many amateur talent slows. Eckstein also expressed a passion for football. He won a sporting scholarship for physical education; however, soon afterward he broke his collarbone and decided to pursue a career with less physical contact, singing. Billy Eckstein moved from Pittsburgh to Washington, D.C., where he attended Armstrong High School. After graduating from high school, Eckstein enrolled in college, starting at St. Paul Normal and Industrial School in Lawrenceville, Virginia, then transferring to Howard University in Washington, DC. In 1930, Eckstein won an amateur music contest at Howard Theater by imitating Cab Calloway and then decided to sing full time. Eckstein quickly found a spot in Tommy Myles' band; however, things did not work out, and Eckstein returned to college.

From 1934-1939, Billy Eckstein changed the spelling of his name to Billy Eckstine because a club owner thought it sounded "too Jewish." At this time, Eckstine worked as a singer for small dance bands in the mid-Atlantic region. By the late 1930s, Eckstine worked his way west to Chicago, where Buddy Johnson, composer and tenor saxophonist, recommended that he join Earl "Fatha" Hines' band, Grand Terrace Orchestra, as primarily a singer and trumpet player. From 1939-1943, Eckstine was able to work with new jazz musicians that signed up with Hines' band, such as the famous Wardell Gray, Dizzy Gillespie, Sarah Vaughan, and Charlie Parker. In 1942, Eckstine, while in Hines' band, composed the blues classic "Jelly Jelly" and the R&B top hit "Stormy Monday Blues."

By 1943, Eckstine formed his own band consisting of young bebop musicians that formed the first true bebop big band. The genre of jazz, bebop, came out of the swing era and expanded upon its unique improvisational elements. Members of Eckstine's band were modernist figures and the future superstars of jazz, such as Wardell Gray, Charlie Parker, Dizzy Gillespie, Gene Ammons, Dexton Gordon, Miles Davis, Kenny Dorham, Fats Navarro, Sarah Vaughan, and Art Blakey. At one point, Eckstine was offered a part in Till the Clouds Roll By, an MGM film made in 1946. He turned down the offer because his band was not included. In 1947, Eckstine's band dissolved because of financial problems, and he continued his career as a successful solo singer.

At first, there was not one single big hit that established him, but rather a series of songs that people liked, among them "Fools Rush In" and "Everything I Have Is Yours." In 1984, Eckstine said in an interview that "they weren't ready for black singers singing love songs." By 1949, MGM records listed him as one of its most popular singers. In 1950, Eckstine made an appearance at the Paramount Theater in New York City that was noted to draw more fans than Frank Sinatra. During the 1950s, Billy Eckstine, whom disk jockeys nicknamed 'Mr. B.," designed and patented a high roll collar that formed a B over a Windsor-knotted tie. This fashion statement became known as the "Mr. B. Collar." Eckstine's popularity grew not only on U.S. pop charts, but also in Britain, hitting the Top Ten twice. "No One But You" and "Gigi," as well as several duets with Sarah Vaughan, became quite popular in Britain at the time. Recordings with Sarah Vaughan, Count Basie, and Quincy Jones, allowed Eckstine to return to his jazz roots throughout his singing career. Eckstine regularly topped the Metronome and Downbeat polls, as the Top Male Vocalist of the era. In 1953, Billy Eckstine married the former Carolle Drake. This was Eckstine's second marriage, and he had seven children, all with Carolle. Their marriage, like Eckstine's first, ended in a divorce in 1977.

As the rock 'n' roll movement began to take fans, it was not long before Eckstine's hits fell from the pop charts. In 1960, Eckstine produced the LP No Cover, No Minimum, which incorporated the skills of Eckstine's trumpet playing. Eckstine recorded several albums for Mercury and Roulette in the early 1960s, recorded a single with Ian Levine as part of his Motown revival project on the Motor City label, and made few recordings for Al Bell's Stax/Enterprise imprint. In 1986, Eckstine recorded his last album, Billy Eckstine Sings with Benny Carter, which was Grammy nominated.

Throughout the course of his career, Eckstine made appearances on a variety of television shows including The Ed Sullivan Show, The Nat King Cole Show, The Tonite Show with Johnny Carson, The Merv Griffin Show, The Dean Martin Show, The Flip Wilson Show, Playboy After Dark, and also performed as an actor in Sanford and Son, and movies including Skirts Ahoy (1952), Let's Do It Again (1975), and Jo Jo Dancer (1986).

Lloyd Sachs from the Chicago Sun-Times said that, "during his final years, when his eerily deepened voice had lost all but an iota of its range, his effortless swing, storytelling command and personal charm lifted the material." Sachs concluded that Eckstine's "blues imparted an advanced wisdom and his ballads could be profoundly moving." On March 8, 1993, Billy Eckstine died in Pittsburgh, Pennsylvania. Several albums of early recordings and his most popular tracks have been released in his memory since his death. His legacy remains as one of the first African American singers to have mainstream success. Eckstine was not only a successful ballad singer, but also a musician, band leader, composer, producer, fashion icon, actor, and the father of seven children.