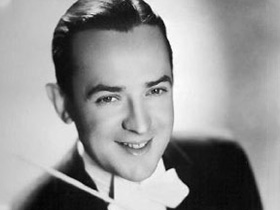 James "Jimmy" Dorsey was born in Shenandoah, Pennsylvania, on February 29, 1904. He began playing music as a young boy, first on the saxophone, some trumpet, and later on the clarinet. He and his younger brother Tommy worked with numerous bands on many different labels until they had a falling-out, during which they swore to never play together again. Jimmy began his own band and was extremely successful with many of his songs reaching high numbers on the charts. Not long after the brothers reconciled, Tommy died suddenly, and only a year later Jimmy Dorsey passed away from throat cancer on June 12, 1957. He was 53 years old.

Jimmy Dorsey was born February 29, 1904, in Shenandoah, Pennsylvania. He was the first son of Theresa Langton Dorsey and Thomas Francis Dorsey, Sr., who was a marching-band director and a music teacher. His father taught him to play alto saxophone. He and his younger brother Tommy, who played trombone, practiced their instruments together throughout their childhood. At the age of seven, Jimmy was already playing with his father's band. He made his first public appearance at the age of 9 with J. Carson McGee's King Trumpeters in New York in September of 1913. In 1920, the two brothers started Dorseys' Novelty Six, which later was known as Dorseys' Wild Canaries. Jimmy and his brother worked together with numerous bands and popular musicians throughout their career. Jimmy joined the Scranton Sirens and then in 1924 he moved to New York and joined the California's Ramblers. In 1925, he played in the Jean Goldkette Orchestra and also in Paul Whiteman's Orchestra in 1926.

The brothers created a band called Dorsey Brothers Orchestra in 1927 and signed to Okeh Records. Their first song to achieve chart status was "Coquette" (vocals by Bill Dutton and composed by the brothers) in June of 1928. "Let's Do It (Let's Fall in Love)" (composed by the brothers with vocals by Bing Crosby) was their first song to reach the top ten on the charts. Despite all the brother's success, they frequently disagreed on how to run the band and argued quite often. Jimmy would allow his brother to take charge and lead the band. He had an easy-going personality and was considered a friend by his band members. Tommy, on the other hand, was known for his temper and seemed to begrudge Jimmy his laid-back demeanor. Band members also felt that Tommy asked too much from them. Their clash of personalities finally came to the forefront in 1935 on the bandstand. Tommy began counting the beats for the next song the band was going to play. Jimmy stopped him and said, "Isn't that a little too fast, Mac?" Tommy walked off the stage, swearing to never play music with his brother again. Jimmy signed to Decca Records and changed his band title to Jimmy Dorsey and His Orchestra. His first song with the band, which he composed, hit the charts in December of 1935 titled "You Let Me Down." For the next two years, Jimmy Dorsey and His Orchestra moved to Los Angeles and provided accompaniment for Bing Crosby on a radio show called the "Kraft Music Hall." Jimmy ranked as the third most-successful recording artist of the year in 1944. Bing Crosby and the Andrews Sisters, also signed under Decca Records, ranked above him. A time of high competition in the swing genre started to arise. Jimmy and Tommy were competing head-to-head for fame and fortune.

In 1947, Jimmy signed with MGM Records. In the same year, the brothers began putting their tensions aside and filmed The Fabulous Dorseys. The movie provided an inside look at the brothers' lives from practicing instruments as children to reaching the big time in adulthood. Jimmy and Tommy acted as themselves which gave a very personal feel to the film. They acted out the challenges they faced while trying to lead the Dorsey Brothers Orchestra and showed what their lives were like on the road struggling to be recognized. In 1950, Jimmy switched to Columbia Records. Tommy offered his elder brother a seat in the Tommy Dorsey Orchestra which Jimmy accepted and the band was later renamed "The Fabulous Dorseys." They hosted a live show on CBS called "Stage Show." This is the same program on which Elvis Presley made his first appearance on in January of 1956.

Tommy died unexpectedly in 1956 and Jimmy was diagnosed with cancer the same year. He led the band after Tommy's death until he died only a year later. Jimmy received a gold record (500,000 sales) for his song "So Rare" and in the week of his death, the song reached the top five on the charts. This same song became the highest-rated big band song during the beginning of the rock-and-roll era when it achieved the number two spot in Billboard Magazine's popularity ranks.

Jimmy Dorsey died of throat cancer at age 53 on June 12, 1957, in New York City. He was a pioneer in the Big Band Era. His distinct style and dedication to his music showed through every work he created.