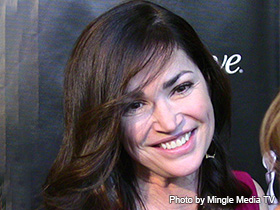 When most people think of the popular television actress Kim Delaney, they focus on her tough, take-no-prisoners portrayal as detective Diane Russell on the long running police drama NYPD Blue. Born in 1961 in Philadelphia, Pennsylvania, Delaney has filled many roles, both on the small and big screen.

Kim Delaney was born November 29, 1961, to Joan and Jack Delaney. Her mother worked as a homemaker, and her father led the local United Auto Workers union. She was raised in the Roxborough section of Philadelphia, where she attended J.W. Hallahan Catholic Girls High School. She grew up with four brothers: Ed, John, Keith, and Patrick, which helped her become familiar with working around men. "I know how guys talk, so I'm not easily offended. Guys can fight and be best friends five minutes later. Women have to air it out, hold on to it, work on it," Delaney said in a 1995 interview with People, speaking of her predominately male cast on NYPD Blue. While she was a senior in high school, Delaney began modeling for the Elite Modeling Agency in New York City on the advice of a close friend. Appearing on the covers of the magazines Seventeen and Glamour earned her a place in a prominent acting school where she studied under a well-known coach, William Esper.

In 1981, Delaney's first role out of acting school was playing 'virginal' teenager Jenny Gardner on All My Children, which lasted four years. "She's got this charisma," said co-star Michael Knight. "She became outrageously popular with the public." During her four-year stint on ABC's All My Children, Delaney married her first husband, Charles Grant, in 1984, but the relationship quickly ended four years later. Her character on All My Children was tragically killed off shortly thereafter. After a brief attempt to make movies, Delaney returned to television in 1987 to guest star as a client on Steven Bochco's successful series, L.A. Law, where coincidentally she played opposite Jimmy Smits, whose character she would eventually fall in love with on Blue several years later. Following her early success in television, Delaney decided to test her abilities in the movies, making her debut in the 1985 teen flick, That Was Then...This Is Now opposite Emilio Estevez.

On the set of an unsuccessful 1988 NBC science-fiction miniseries, Something Is Out There, she met her second husband, Joe Cortese. "Some movies you do, you know they're terrible, but you do them for a reason — money," Delaney told USA Today in a 1995 interview. Delaney gave birth to her only child, Jack, in 1990, for which she had to leave her job as a reporter in the Vietnam War series Tour of Duty. Her second marriage ended in divorce four years later, and she had a nine-year engagement with Alan Barnette from 1997 to 2006. Eventually, Steven Bochco recruited her for a four episode spot late in the second season of the highly successful NYPD Blue, and she was hired permanently for the series' third season in 1995, staying on until she left to start Philly in 2001.

Delaney took home an Emmy for Best Supporting Actress (1997) and two Screen Actors Guild awards (1995 and 1996) for her portrayal as Detectove Diane Russel. However, Delaney fell on hard times in the years following her departure from NYPD Blue. First, Philly was cancelled, and then she was had to leave her role in C.S.I. Miami. She began to drink more often. In 2002, she was cited for DUI outside of her home in Malibu and ordered to attend a safe driving course and pay a $300 fine. Perhaps her greatest test came when she lost custody of her son shortly after. Jack remembered his mother acting very erratically and demanding at times before the arrest. Delaney went to rehab and came back with a new lease on life. Her brushes with alcoholism prompted her to become involved in work outside of her acting profession. She became an advocate for breast cancer awareness with her favorite charity, "Warriors in Pink." Through her association with Revlon, a cosmetics company, she helped to sponsor their annual "Run/Walk for Women for Breast Cancer" event in 1999. She remained a spokeswoman for the company for several years.

After several guest appearances, including a four-episode reunion on NYPD Blue, and on Law & Order: Special Victims Unit, Delaney took on the challenging role of playing the wife of a military man on Lifetime's Army Wives. The show premiered in June 2007, focusing on the lives of four wives and one man while their spouses commute between their home in South Carolina and war-torn Afghanistan. "We have our heroes fighting for our country, and then we have the heroes taking care of those heroes, and that's what the show is about," she said. Delaney plays Claudia Joy Holden, a frequent party-thrower and control freak. Part of the draw for Delaney was that for once in her career she'd be alongside a majority cast of women. "It's so much fun because it's like I get to have sisters and just goof around," Delaney said in an interview with TV Guide. Delaney left Wives in 2011 after starring in 81 episodes.