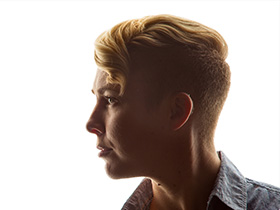 Meg Day is a prize-winning and Public Poetry Project poet who is interested in publishing American Sign Language (ASL) poetry on the page to highlight its presence in the literary community.

Meg Day was introduced to poetry through a combination of hip-hop, spoken word, and American Sign Language (ASL) storytelling. She earned a BA from the University of California - San Diego, an MFA from Mills College, and a PhD in Literature and Creative Writing - Disability Poetics from the University of Utah. She has received numerous honors and awards, including a National Endowment for the Arts and an Amy Lowell Poetry Traveling Scholarship. Last Psalm at Sea Level (2014) is Day's first full-length poetry collection. The poem "Aubade for One Still Uncertain of Being Born" from this collection was selected for publication by the Public Poetry Project of the Pennsylvania Center for the Book in 2017. At the time of this writing, Meg Day is an Assistant Professor of English & Creative Writing at Franklin & Marshall College.

Meg Day was born and raised in the Bay Area of northern California. "... I'm a person who was raised in a Christian home, I came up in the Presbyterian church, [and] I went to Catholic school most of my younger life," she tells Tony Trigilio during a Radio Free Albion Poetry Podcast while reflecting on her 2014 collection, Last Psalm at Sea Level. She says the process of writing this collection expanded her view of spirituality as a young queer person. "When I write, I look up. I'm interested in speaking to something that feels there but I can't prove."

Day was introduced to poetry through a combination of hip-hop, spoken word, and American Sign Language (ASL) storytelling, and transitioned from participating in poetry slams to studying poetry on the page and, later, to translating ASL poetry to English. With a BA from the University of California - San Diego, an MFA from Mills College (2010), and a PhD in Literature and Creative Writing - Disability Poetics from the University of Utah, Day aims to develop "a space for folks who are linguistically invested or fluent in ASL to participate in the creation of bilingual and therefore bimodal poems and literary criticism without further oppressing the Deaf community," she tells Oliver Bendorf of Devil's Lake.

As an educator she has served youth by teaching poetry and performance skills with Youth Speaks and as a WritersCorps Teaching Artist. Her first chapbook, When All You Have is a Hammer (2012), won the Gertrude Press Chapbook Contest and her second, We Can't Read This (2013), was a Gazing Grain Chapbook Contest winner. Gazing Grain Judge Cathy Park Hong says We Can't Read This is "a how-to on re-imagining the body and language when one is denied the instruments of voice and hearing. ... Through diagrams of sign language and spare fragmented lyrics, the series dramatizes the physical struggle of speech and movingly charts alternate modes of cognition. These poems are a personal and political rumination on disability as well as a beautiful and transformative exegesis on empathy."

In Day's quest to publish ASL on the page, many of the poems in We Can't Read This began in ASL form. "...[S]o often," she says, "folks don't consider (or even know about) the long history of ASL literature because it doesn't (usually) appear in books on shelves in stores. ASL is barely even considered a legitimate language by most Americans..." She is also interested in the bimodal quality of sound in such poems: the audible and how sound is written — and worked with Poetry Out Loud in Salt Lake City.

While differences between spoken word and poetry on the page are clear, Day tells Bendorf of Devil's Lake that her transition from teaching spoken word and participating in slams (which she tabled in 2011 when leaving Oakland), to studying written poetry revealed that there is a performance quality to "page poetry" readings. "In the slow transition from stage to page," she says. "I frequently felt as if I were straddling some awful barbed-wire boundary that separated academia from, for lack of a better term, poetry for the people..."

In addition to straddling two poetic modes, Day found herself influenced by the variant landscapes of California and Utah when contemplating her first full-length collection, Last Psalm At Sea Level, winner of the Barrow Street Press Poetry Prize. "I began thinking through this book when I lived in California," she tells writer Belo Cipriani, "and completed it after a few years in Utah." She had never lived far from the coast before Utah and goes on to explain how being landlocked changed her perspective on many things, including her sense of self, health consciousness, and craving for a family. "Last Psalm at Sea Level is, for me, a farewell to the life I thought I knew, but also to California..."

The collection also poses the question: "What about a lord...is female and eternal and transgender? I'm interested in remaking god again and again through language," she says. "I'm interested in reclaiming the divine for poets who look upward when they write."

She names the poem "On the Day I Buried My Singing" as one of her first attempts at translating ASL poetry into English and admits to failing at it miserably. "...[I]n ASL, the grammar is in the face, and I haven't yet figured out how to do that," she confesses to radio host Trigilio. "I don't know how to take facial grammar and put it into commas and periods and semicolons and dashes." Clayton Valli is one of her favorite poets, who she says invigorates her efforts in translation. "...his attention to detail, his attention to emotion, made me work harder."

While attending the University of Utah, Day was a Steffensen-Cannon Fellow, a United States Point Foundation Scholar, and Poetry Editor for Quarterly West. She received the Amy Lowell Poetry Traveling Scholarship in 2015-2016, a National Endowment for the Arts Fellowship in Poetry (2013), and a 2012 AWP Intro Award. According to her website, she has also received awards and fellowships from the Association of Writers & Writing Programs, the Sewanee Writers' Conference, Lambda Literary Foundation (2010), Hedgebrook (2011), Squaw Valley Writers (2012), the Taft-Nicholson Center for Environmental Humanities, and the International Queer Arts Festival. She has been nominated three times for a Pushcart Prize, as well as nominated for Best New Poets of 2010.

At the time of this writing, Meg Day lives in Pennsylvania, where she is an Assistant Professor of English & Creative Writing at Franklin & Marshall College. Her poem "Aubade for One Still Uncertain of Being Born," from Last Psalm At Sea Level, was selected for publication by the Public Poetry Project of the Pennsylvania Center for the Book in 2017.

"There is something deeply, deeply lyric about the combination of movement, handshape, facial grammar, emotion that informs my lyricism on the page," she says, "and I feel so, so much gratitude for that."