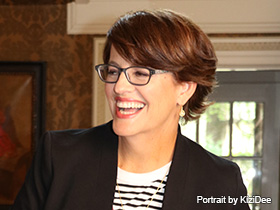 Nonfiction author Kelly Corrigan was born to George and Mary Corrigan in Radnor, Pennsylvania. She worked for non-profit organizations for many years. After receiving her breast cancer diagnosis and learning of her father's bladder cancer diagnosis, Corrigan wrote the New York Times bestselling memoir The Middle Place, soon followed by several other memoirs. She currently lives in San Francisco, California, with her husband and two daughters, where she continues to advocate for cancer awareness and works as a writer. Read more here.

Kelly Corrigan was born on August 16, 1967, in Radnor, Pennsylvania, to George and Mary Corrigan. Corrigan attended Radnor High School, located near Philadelphia, where she learned about true scholarship. After graduation, she continued her education at the University of Richmond, earning her bachelor's degree. Corrigan then earned her Masters in Literature at San Francisco State University. Upon graduation, she worked in the non-profit field for ten years. Corrigan married Edward Lichty, and together they have two daughters, Georgia and Claire.

In 2004, at the age of 36, Corrigan was diagnosed with breast cancer after finding a lump while giving her two daughters a bath. Three months later, her beloved father, whom she affectionately calls Greenie, was diagnosed with bladder cancer. The experience with mortality prompted Corrigan to write her first memoir, The Middle Place, which refers to the precious "sliver of time when parenthood and childhood overlap." The concept of blurred lines resonates throughout Corrigan's story as she struggles with balancing her roles as the caregiver and the person cared for. The format of the book intertwines past and present; the chapters alternate between memories from her childhood and her and Greenie's present battles with cancer. Kelly Corrigan became inspired to write her New York Times bestselling memoir when her father's diagnosis hit. In the event that she or he didn't survive, she wanted her daughters to know their family history and understand her and Greenie's special bond. Both Greenie and Corrigan are now cancer free.

In a similar vein, Kelly Corrigan desired to share her memories of parenting with her daughters in the event she died, so she wrote her second memoir, Lift, as a letter to Georgia and Claire. Lift incorporates multiple stories delving into the risks and joys associated with parenting.

Additionally, Corrigan wrote an inspirational essay entitled "Transcending: Words on Women and Strength," which is a testimony to the deep bonds women share and their friendships. She was taped reading her essay aloud, and over 500 million people have viewed her spirited "Transcending" video on YouTube.

Corrigan also founded the website CircusofCancer.org as a way to inspire others coping with cancer. The site also helps friends and family of cancer patients learn how to best show their love and support. She is still involved with Circus of Cancer and is also a contributor to O, The Oprah Winfrey Magazine. Furthermore, she has written for Glamour and Good Housekeeping magazines.

Kelly Corrigan currently resides in the San Francisco Bay Area with her husband and two daughters. She continues to advocate for cancer awareness and works as a journalist and freelance writer. Additionally, she is working on a comedic screenplay about a theme park near her house.