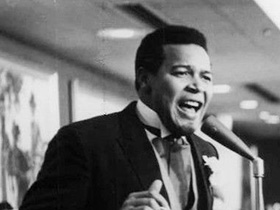 South Philadelphia native Chubby Checker had his greatest hit with "The Twist."

Chubby Checker was born Ernest Evans in Spring Gulley, South Carolina, on October 3, 1941. Although Checker was not born in Pennsylvania, he moved to South Philadelphia at an early age with his parents and two brothers. Checker was most known for popularizing songs that had a special dance move associated with it. He is most famous for recording the song "The Twist" in a 1960 remake of Hank Ballard's version. His smooth twist moves on stage gave him the title "The King of Twist." To this day, Checker still performs live and records original studio albums.

Ernest Evans was born on October 3, 1941 in Spring Gulley, South Carolina. He and his family moved to South Philadelphia when he was very young. Growing up, he worked many odd jobs, including shining shoes, selling ice, and helping out at a butcher's shop. Opportunity came in 1959, when he auditioned for the Cameo-Parkway recording label (a local company) and was signed. Soon after, Dick Clark's wife gave him the nickname Chubby Checker after she heard him sing and noticed a resemblance to Fats Domino, one of Checker's biggest childhood influences.

After signing with Cameo-Parkway and releasing a few singles including "The Class" that never became hits, Checker decided to do a cover of Hank Ballard's song "The Twist" in 1959. It too was not a hit right away, but Checker knew there was something special about it. After more than a year of him campaigning for the song, it finally became popular and skyrocketed to the top of the charts in the fall of 1960. There it stayed for more than four months before it slowly faded away. However, in 1961, "The Twist" was re-released and once again topped the charts. With these two stints at number one on the charts, "The Twist" became the only song to ever have been the number one songs two separate times that were more than a year apart. At the end of 1961, Checker won a Grammy Award for Best Rock Performance for the song "Let's Twist Again."

Checker had a few other top-10 hits in his career including "Slow Twistin'," "Limbo Rock," and "Popeye the Hitchhiker," all of which came in 1962. Around the same time, Checker also starred in two movies on the silver screen, Twist Around the Clock and Don't Knock the Twist and in 1964, Checker married Catharina Lodders, Miss World 1962. Starting in the 1970s, Checker began headlining oldies revival concerts, which came to an end in 1982 when he signed with MCA and released a disco-rock album entitled The Change Has Come. "Running" and "Harder Than Diamond" were two moderately successful tracks from that record. It was not until 1988 that Checker broke back into the top-40 for the first time in nearly 25 years. He had teamed up with the rap group the Fat Boys and released a special version of "The Twist."

Since then, Checker has entered the snack food industry with his own chocolate bars, beef jerky, hot dogs, popcorn, and bottled water. He also found the time to release a new album entitled "The Original Master of the Dance Hall Beat" in 2004 and to go on tour promoting it. In 2008, Checker's The Twist was named the biggest chart hit of all time by Billboard magazine, and continues to perform on a regular basis.