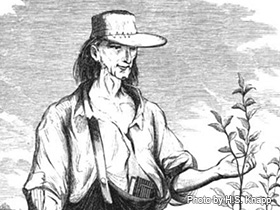 John Chapman, widely known as Johnny Appleseed, was a native of Massachusetts who lived around the time of the turn of the 19th century. He spent his life orcharding apple seedlings in Pennsylvania, Ohio, and Indiana, along what was then the frontier of new Western civilization. Chapman was known for his skills for surviving the wilderness, his universal kindness, and his commitment to spreading the religious beliefs of Christianity, as interpreted by Emanuel Swedenborg. Since the 1870s, Chapman's life and adventures have inspired many works of literature that portray him as a man of extraordinary compassion and a symbol of America's pioneering spirit.

Over the course of two hundred years of retellings, legends of Johnny Appleseed's adventures have come to symbolize the fortitude and bravery of early American pioneers. His uncommon habits and selfless generosity have shaped the memory of his character into that of a divine pilgrim. Legends concerning the man include tales of planting apple orchards from New York to California, floating down the Allegheny River on a great cake of ice, and gaining renown among Native American's as a great medicine man. These and other stories are so fabulous that many rightly question whether such a man lived. Indeed, he did, though more as an eccentric, self-appointed missionary and a savvy, yet benevolent entrepreneur of the United States' natal days, than as a supernatural manifestation.

Johnny Appleseed began his life as John Chapman in Leominster, Massachusetts on September 26, 1774. He was the second child of Elizabeth Simons (Simonds) Chapman and Nathan Chapman, a farmer, carpenter, and veteran of the Revolutionary War. Their first child was Elizabeth, born in 1770, and their third was Nathaniel Jr., who died shortly after birth in 1776. His mother died three weeks later of tuberculosis. Some speculate that their maternal grandparents cared for Elizabeth and John during their young childhood. Nathaniel married Lucy Cooley in 1780 and they lived with her widowed mother in Longmeadow. It is probably that Elizabeth and John spent some amount of their childhood there with their ten half siblings.

Little is known about his life until 1797 when his name appears in records in Northwestern Pennsylvania. All though the majority of his work occurred in Ohio and Indiana, it was in the wilds of this state that Chapman began his horticultural career. His first recorded nursery was planted on the shore of Broken Straw Creek, south of Warren in Warren County. Most of his Pennsylvania experience occurred further south, near Franklin in Venango County in an area known as French Creek. Here, around 1798-1804, Chapman planted a nursery and attempted to procure land. However, tradition holds that these attempts were foiled several times by claim jumpers and difficult land laws. Despite popular lore, it is unlikely that Chapman ever lived in Pittsburgh, although he probably visited there for supplies. From Franklin, it is likely that he moved on to central Ohio, in accordance with his style of nomadic living. The area of Mansfield, Ohio is particularly rich with stories of his local activities.

John Chapman was not the first to introduce orchard cultivation to the Midwest. His strategy of moving his plantings ahead of the early pioneers was however, quite unique. Similar entrepreneurs had not the social mobility of Chapman, who never married and was famous for his skills and knowledge for surviving in the wilderness. Also, despite traditional beliefs, he did own land. In fact some estimates say he owned as much as 1,200 acres in Ohio, and Indiana.

Unlike today, apples were an essential staple of the diets of those forging into unsettled, remote territory, and in some cases, the law required an orchard as a prerequisite for land ownership. Apples were also used for bartering in a time when cash was limited. Using apple seeds from the cider mills of Pennsylvania, Chapman would move ahead of the homesteaders, on routes along which he guessed they were likely to settle, planting saplings from which they could start their orchards. They would buy or trade a small amount for the seeds. It is widely stated that he would give away seeds and saplings to those who could not pay. He has also been credited for kindness to all wild beasts, including insects and rattlesnakes. Surely his generosity and unusual gentleness contributed to his fame.

Even so, his eccentric ways and fabled exploits have been equally responsible for endearing him to popular memory. Chapman lived simply and endured many hardships. Tradition holds that his preferred attire included a modified tin can for a hat, a coffee-sack cloak, and bare feet, even in winter time. It has been said that he would accept cast-off clothing in exchange for saplings, but would often distribute them to those he met who seemed more in need than he. Apparently, he spent most of his life traveling the countryside alone, except for a brief exploit with his half-brother, Nathaniel, and he preferred to sleep outside, no matter the weather, rather than in a bed. Additional tales of his adventures describe his participation in the War of 1812 as a scout who warned secluded settlers of oncoming Indian attacks and called up reinforcements. Stories from his young manhood in Pennsylvania credit him with tree-chopping skill that rivaled Paul Bunyan and with having survived a whole winter on butternuts.

Besides agriculture Chapman also employed his time as a self-appointed missionary for the Church of the New Jerusalem. This Christian group was based on the Biblical interpretations of Swedish scientist and theologian, Emanuel Swedenborg, whose doctrines supported or inspired Chapman's own qualities of kindness to all living things and serving others without consideration of recompense. Chapman would divide up his Swedenborgian tracts and strategically pass them around to the cabins his visited. Stories say when visiting, he would ask if the settlers cared to hear some "News right fresh from Heaven?" With permission, he would read engagingly from the Bible or one of his tracts. He is also said to have been a preacher of extemporaneous sermons. Word of his zealous, primitive preaching spread even to the Swedenborg Society of Manchester England, which published an account of his deeds in 1817.

Chapman, affectionately nicknamed "Johnny Appleseed" by the frontiersmen who experienced his benevolence, continued planting spiritual seeds and apple seeds until his death on March 18 in 1845. He died at the home of a friend, William Worth, in Fort Wayne, Indiana. The site traditionally believed to be his grave is north of that city in Archer Cemetery, part of Johnny Appleseed Memorial Park.

Chapman's fame as a national icon began in 1871 with a richly descriptive, romantic account of his life by W. D. Haley in Harper's New Monthly Magazine. Since that time Johnny Appleseed has been characterized as a victim of unrequited love, the patron saint of American horticulture, and many other fantastic personages in innumerable biographies, novels, musical scores, motion pictures, and works of poetry and children's fiction. There are also memorials dedicated to him in Massachusetts, Pennsylvania, Ohio, and Indiana. And, needless to say, his fame as a symbol of compassion and pioneering skill and courage endures in popular folk lore and tradition.

This biographical sketch was prepared by Alexis Schmidt.