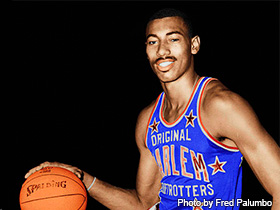 Born in Philadelphia on August 21, 1936, Wilt Chamberlain was one of the most dominating basketball players in the history of the game. He was an offensive force second to none who, due to his unusual height, earned the nickname "Wilt the Stilt." During his standout rookie year of 1959-60, Chamberlain became the first player in NBA history named to be named MVP and Rookie of the Year in the same season, and along the way, he set eight NBA season records. After retiring from basketball in 1973, Chamberlain found further success as the author of three books. Chamberlain died in Los Angeles, California, on October 12, 1999.

Wilt Chamberlain was born on August 21, 1936, in Philadelphia, Pennsylvania. He was one of 11 children of Olivia and William Chamberlain. Unusually tall for his age, Chamberlain was constantly teased about his height; he would eventually reach 7'1". Chamberlain would soon discover that his height was not a curse, but rather a blessing, as he was able to excel in the game of basketball. With his interest in the sport growing, Chamberlain attended Overbrook High School where he quickly became a basketball legend and the most heavily recruited player in the country. Eventually, he settled on the University of Kansas, where he then led the Jayhawks into the 1957 NCAA finals, losing in triple overtime to top-ranked North Carolina.

Because Chamberlain's skills were far more advanced than any of his competitors, opposing teams would often "gang guard" Chamberlain or hold the ball for long stretches of time, limiting his offensive opportunities. Frustrated by this tactic, Chamberlain left school early and joined the Harlem Globetrotters, briefly touring the country with them. In 1959, Chamberlain became a professional in the National Basketball Association (NBA), joining the Philadelphia (now Golden State) Warriors. He became an instant dominating force and was named both Rookie of the Year and Most Valuable Player (MVP) of the league, setting eight NBA season records along the way. After 14 dominating and record-breaking seasons, Chamberlain retired from the NBA in 1973, capturing two championships: one in 1967 with the Philadelphia 76ers, and another in 1972 with the Los Angeles Lakers.

Upon retirement, Chamberlain held numerous records: he scored 50 or more points 118 times, 60 or more points 32 times, and is the NBA's all-time rebounding leader with 23,924 rebounds. Over his storied career, Chamberlain was named league MVP four times, voted to 13 All-Star Games, and crowned NBA scoring champion for seven consecutive years. His 1961-62 season was phenomenal. He established records for points (4,029 total, and 50.4 points per game) and once scored 100 points in a single game, a mark that has withstood the test of time. Although his feats were often credited to his tremendous size, Chamberlain was a true natural who possessed exceptional speed, agility, stamina, and strength. He was elected to the Basketball Hall of Fame as a player on April 28, 1979, and was chosen as one of the 50 greatest players in NBA history in 1996.

While his main area of success was the basketball court, Chamberlain was able to take his experiences as a player and celebrity to new heights as both an autobiographer and writer. In 1973, Chamberlain and biographer David Shaw wrote Wilt: Just Like Any Other 7-foot Black Millionaire Who Lives Next Door, a controversial autobiography that served as his first venture into writing. The book painted a picture of the NBA that few had seen before, as it was one of the first accounts told specifically by a player from the league. Even more controversial, however, was his next autobiography, A View from Above, which he penned by himself in 1991. In the book, Chamberlain made now infamous statements regarding his private life, sharing many intimate stories and displaying his unique and witty writing style. The book, while a success for Chamberlain, brought about many questions regarding his inhumane lifestyle, mainly from pro-feminine groups who were disturbed by his supposed mistreatment of women. Able to overcome the initial adversity he faced as a writer, Chamberlain wrote his last book in 1997, entitled Who's Running the Asylum? Inside the Insane World of Sports Today. Seen as a follow-up to A View from Above, the book focused primarily on Chamberlain's opinions about the state of professional basketball in the nineties. Just as his first autobiography had stated, the league was precariously built on both money and power, and many changes were needed in order for the sport to survive in the future.

Chamberlain spent his last years living in Los Angeles, continuing his work as an author/biographer. Already having authored three books, he was working on yet another when he died of heart failure at the age of 63. Not much is known about his last book, as the unfinished piece was never published. A lifelong bachelor, Chamberlain was still living alone when he died on October 12, 1999, in Los Angeles. Leaving behind a legacy that will forever remain one of the most accomplished, Chamberlain continues to inspire legions of basketball fans both young and old.