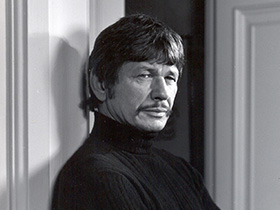 A star of action movies, including Death Wish, Charles Bronson was born in Ehrenfeld.

Charles Bronson was born November 3, 1921, in Ehrenfeld, Pennsylvania. He worked in coal mine industry with his brothers, and then he was drafted into World War II. After the war, he took acting lessons at the Pasadena Playhouse. He had small roles in films until his blockbuster Death Wish hit theaters in 1974. He continued acting in famous movies during the 70s through the 90s. At this time he started doing television work, which later he stopped doing because of his failing health. He passed away August 30, 2003, in Los Angeles from pneumonia.

Charles Bronson was born, as Charles Dennis Buchinsky, on November 3, 1921, in Ehrenfeld, Pennsylvania. Born to Lithuanian immigrant parents, he had claimed to have spoken no English at home during in childhood. However, he spoke fluent Russian, Lithuanian, and Greek. His father died when he was ten and at 16 he started working in the mines with his brothers to support the family, only being paid one dollar per ton of coal. Bronson was one of 14 children. The experience of working in mines later resulted in a lifetime fear of being in enclosed spaces. He was the first in this family to graduate high school, and expected to go into mining like the rest of his family, but he was drafted into the army in 1943. He served in World War II, first as a truck driver and later as a trained tail gunner, assigned to a B29 bomber. He flew on 25 missions and received a Purple Heart for wounds he incurred in battle, among other decorations.

After returning from the war, he wanted to use his GI Bill to study art. So, he started working as a set designer for a Philadelphia theater, which he later switched his focus from production to acting after playing a few small roles. In 1949, he enrolled at the Pasadena Playhouse for acting lessons. An instructor there introduced him to a director known as, Henry Hathaway, which resulted in his first film debut in You're in the Navy Now (1951). During this time he had changed his stage name at the suggestion of his agent, who was fearful that his last name would damage his career. Bronson is said to come from the "Bronson Gate" at Paramount Studios, at the north end of Bronson Avenue. At this time he was also married to his first wife Harriet Tendler, whom he later divorced in 1967. They had two children together. In 1968, he married his second wife, Jill Ireland and had one daughter. After acting in several movies, Bronson went to Europe, where he would be given bigger and better opportunities.

While in Europe he acted in La Bataille de San Sebastian [Guns for San Sebastian], the cult western, C'era una volta il West [Once Upon a Time in the West], Le Passager de la pluie [Rider on the Rain], and Soleil Rouge [Red Sun]. After a few years in Europe, he returned to Hollywood a full-fledged star. In 1970 and 1971, Bronson was given a Golden Globe for his role in Rider on the Rain and another for "The most popular actor in the world." After nearly 25 years as working as an actor, he became an overnight sensation when he hooked up with director Michael Winner. Bronson shot several movies with Winner, but his breakthrough came in 1974 with the release of the film, Death Wish. Bronson played Paul Kersey, a New York architect, whose world is torn apart by the murder of his wife and rape of his daughter. After a vacation in Arizona, he returns to New York with a vengeance. He shoots and kills a mugger who tries to hit him, and after that he goes on a killing spree. The police are trying to catch the killer, while the public is thankful that someone is taking a stand against criminals. This film was so popular that is spawned four sequels over the next 20 years.

Bronson remained busy throughout the '70s and '80s by making nine films, most of which were taking on more of a violent tone. During this time he co-starred with his second wife Jill. He remained married to her until she lost her life to cancer in 1990. In the 90s, he also started doing television work. Bronson's final film role was as police commissioner Paul Fein in a TV series known as, Family of Cops, because his health was beginning to take toll, when he was diagnosed with Alzheimer's. In 1998, he marred his third wife, Kim Weeks to whom he remained married, until his death on August 30, 2003, in Los Angeles, California from pneumonia. He was 81. Surviving along side his wife are six children: Suzanne, Tony, Katrina, Zulieka, Paul, and Val.