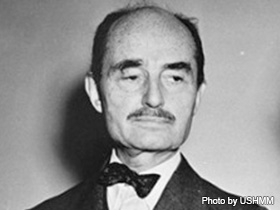 Francis Biddle served as U.S. Attorney General and a judge on the Nuremberg War Crimes Tribunal.

Francis Biddle was born in Paris, France, on May 9, 1886. He attended Harvard University, where he attained a law degree. In 1934, President Roosevelt appointed Biddle as chairman of the National Labor Relations Board due to his great concern for labor issues and civil liberties. In 1941, he was sworn in as U.S. Attorney General. He served in this position throughout most of World War II, making both good and poor judgments. After Roosevelt's death, Biddle stepped down as Attorney General to become a judge at the International Military Tribunal at Nuremberg. He passed away on October 4, 1968.

Francis Beverley Biddle was born on May 9, 1886. He is a descendent of Edmund Jennings Randolph, the first Attorney General of the United States, and of Nicholas Biddle, president of the Second Bank of the United States who engaged in the Bank War (1832-1836) with Andrew Jackson. Francis Biddle was born in Paris, on a trip his parents took to Europe because of his father's health. His parents, Algernon Sydney Biddle, a professor of Law at the University of Pennsylvania, and Frances Robinson, were advised not to return to the U.S. at that time, for fear of losing the baby during birth, due to poor medical conditions aboard the ship. When his father died in 1892, Francis' mother took him and his brothers, Moncure, Sydney, and George, overseas to live in Switzerland for two years. Upon returning to America, he attended Haverford Academy from 1895-1899 and the Groton Academy, a prep school in Massachusetts, from 1899-1905, where he excelled in gymnastics and boxing. He then went on to Harvard University to earn both his undergraduate B.A. and his graduate law degree, in 1909 and 1911 respectively.

Biddle began his career working as a private secretary to Supreme Court Justice Oliver Wendell Holmes during his 1911-1912 term. Holmes, who was well known for his advocacy of civil rights, had a profound influence on Biddle and his political views. In his own autobiography, Biddle described the impact of his stimulating year as secretary to the Associate Justice. He wrote:

... a year in Washington with Justice Holmes that roused and stimulated me more than anything I had experienced since the first exciting plunge into common law at the Harvard Law School. I moved into a realm of speculation and the exchange of ideas that I hardly knew existed, and some of my schoolboy limitations fell away. It was a period of breathlessness and growth.

After his year in Washington, Biddle moved to Philadelphia. He became briefly involved in politics several times, supporting Theodore Roosevelt's presidential candidacy as a member of the Bull Moose Party in 1912 and becoming a delegate to the Progressive party convention in 1916. The following years in Philadelphia were spent practicing law. He joined the family firm of Biddle, Paul and Jayne in 1912 for only three years, and then moved to the firm of Barnes, Biddle and Myers in 1917. The following year he married Katherine Garrison Chapin. The two went on to have two children, Edmund Randolph and Garrison Chapin. The next few years would include a four-year term as an Assistant United States Attorney in 1922, and the publication of Llanfear Pattern, a novel critical of Philadelphia high society, in 1927.

During the time that followed, Biddle became increasingly interested in workers' rights and the protection of civil liberties. Although he was officially a Republican, he grew disenchanted with the party's views over certain issues, particularly in its lack of concern for labor issues. After learning of the conditions in which the coal miners of Pennsylvania labored in, he fought to improve their work environment. His efforts concerning workers rights prompted President Franklin D. Roosevelt to appoint Biddle as chairman of the National Labor Relations Board in 1934 on which he only served in for one year.

When the Tennessee Valley Authority (TVA) was accused of allegations of corruption and unfair competition, Biddle served as a legal counsel in the congressional investigation that followed. The inquiry led by Biddle disproved these claims and helped restore the TVA's reputation. Biddle later described this accomplishment as his greatest contribution to FDR's New Deal. In 1939, he was appointed a judge on the U.S. Court of Appeals, Third Circuit, in which he only served in for one year before leaving to become the United States Solicitor General. This appointment allowed Biddle to vigorously defend FDR's New Deal, but this position was also short-lived as he left to succeed Robert Jackson as U.S. Attorney General in 1941.

Three months after being sworn in as Attorney General, the Japanese attacked Pearl Harbor. During this time of war, Biddle implemented many orders that, contrary to his liberal views and his stance on civil liberties, threatened individual freedoms; the most notable one being the internment of Japanese Americans on the West Coast. Biddle authorized the relocation and internment of "enemy aliens" after December 7, 1941, an action that became the precursor for Roosevelt's Executive Order 9066. In his memoirs, Biddle expressed deep regret for his radical actions during wartime.

April of 1944 brought about one of Biddle's most memorable acts as Attorney General. Sewell Avery, President of Montgomery Ward Stores and an opponent of Roosevelt's New Deal, intentionally refused to increase wages for his unionized workers and to enforce a closed shop, as was ordered by the National War Labor Board. Avery's persistent unwillingness to comply with government orders prompted President Roosevelt to take action. Biddle watched, supervising as the US Army physically carried Avery, still clinging to his office chair, out of his Chicago office. Avery was livid, intending to insult Biddle by yelling, "You New Dealer!" Biddle, an avid supporter of FDR and his New Deal legislation, took this as a compliment. At the request of President Truman, Biddle handed in his resignation after the death of Franklin Roosevelt. In his memoirs, Biddle recalled leaving under some pressure, but President Truman claimed that Biddle's departure was voluntary.

In 1945, Biddle was appointed to a judgeship at the International Military Tribunal at Nuremberg. Here, he tried Nazi leaders with "crimes against humanity," in the wake of World War II. Following the trials at Nuremberg, Biddle and the Tribunal formulated the position that aggressive wars should be declared criminal under international law. This was a recommendation that President Truman found worthy. The last appointed position held by Biddle was as chairman of the Franklin D. Roosevelt Memorial Commission in 1955, although he was a chairman for the Americans for Democratic Action from 1950-1953. During his retirement, Biddle devoted himself to writing his memoirs and speaking of his career.

Biddle died of a heart attack on October 4, 1968, in Wellfleet, Massachusetts. In 2004, Joanna McClelland Glass, Biddle's personal secretary during his final years, wrote a play entitled Trying in which Biddle was the central character. He is best remembered for his acts as Attorney General, which include: his hasty judgment on Japanese American internment, his swift removal of Sewell Avery at Montgomery Ward, his involvement at the International Military Tribunal at Nuremburg, his support of civil liberties, his defense of labor issues, and his great support for Roosevelt's New Deal.