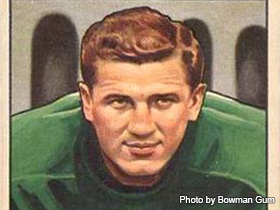 Namesake of the award for the best defensive player in college football, Chuck Bednarik helped lead the Philadelphia Eagles to two NFL championships.

Charles Phillip "Chuck" Bednarik was born on May 1, 1925 in Bethlehem, Pennsylvania. He began to play football at Liberty High School. Upon graduation from high school, Bednarik entered the United States Army Air Forces. He returned home to attend and play football at the University of Pennsylvania. He was then drafted in the first round with the first overall pick by the Philadelphia Eagles. He went on to become a college and pro football hall of famer and one of the greatest players to ever play the game of football, on both sides of the ball.

Charles Phillip "Chuck" Bednarik was born on May 1, 1925 in Bethlehem, Pennsylvania. He began to play football in high school at Liberty High School in the Lehigh Valley Conference. Upon graduation from high school Chuck entered the United States Army Air Forces.

Bednarik served in the air forces as a B-24 waist gunner with the Eighth Air Force. In Germany, he flew in over 30 combat missions making him into a highly decorated soldier.

After returning to the United States from serving his country, Bednarik attended the University of Pennsylvania in Philadelphia, Pennsylvania from 1945 to 1948. He had a brilliant collegiate career and would later be named to the College Football Hall of Fame. Other highlights of his college football career include being the second runner-up for the Heisman Trophy and receiving the Maxwell Award, awarded to the best college football player in the United States. Bednarik was an All-American in college football and had an impressive senior year in 1948.

Bednarik was the first player drafted in the 1949 National Football League draft, chosen by the Philadelphia Eagles. With the Eagles, he started on both offense (as a center) and defense (as a linebacker). Bednarik went to eight pro bowls in his fourteen-year football career. In 1953, he was voted the Pro Bowl's Most Valuable Player. He was a member of the Eagles' NFL Championship teams in 1949 and 1960.

Bednarik was most famous for being both an offensive and defensive football player. He was the leader on defense playing the middle linebacker position and he hiked the ball as a center on offense. Bednarik was made a household name in Philadelphia by sports writer Hugh Brown who dubbed him the nickname, "Concrete Charlie." Contrary to popular belief the nickname was not originated due to Bednarik's bone crushing hits, however suitable, it was given to him because he sold concrete for the Warner Company in the off-season of football. In the decade that Bednarik played, a pro football player could not make a living off of their contract salary.

Bednarik's most bone crushing hit came on November 20, 1960. The Eagles were beating the Giants 17-10 at Yankee Stadium. All-Pro Frank Gifford, the running back of the New York Giants, went over the middle for a pass. Immediately after Gifford made a spectacular catch Bednarik swung through the air to legally tackle Gifford. After the vicious and body wrenching tackle, Bednarik stood over the silent and unmoving Gifford to watch the clock run out. This tackle is considered to be the most famous tackle in NFL history.

Perhaps his most noticeable award was not one he received but one named after him. The Chuck Bednarik Award is given annually to the best defensive collegiate football player in the United States. It has been awarded from 1993 to the present.

Chuck Bednarik died on March 21, 2015, in Bucks County, Pennsylvania, and was survived by his wife of 67 years, Emma, their five children and ten grandchildren.