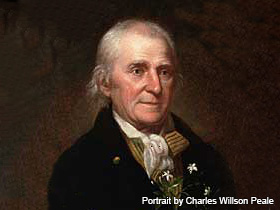 A famed botanist and son of John Bartram, William Bartram lived in Kingsessing.

William Bartram, a Philadelphia botanist, has been described by many as America's first native born naturalist/writer. He was born in Kingsessing, Pennsylvania, a neighborhood in the southwest section of Philadelphia, on February 9, 1739. His major work is entitled Travels Through North & South Carolina, Georgia, East & West Florida, The Cherokee County, the Extensive Territories of the Muscogulges, or Creek Confederacy, and the Country of the Choctaws (1958). He was an explorer who traveled to present-day Florida, Georgia, South Carolina, and North Carolina. Bartram discovered hundreds of specimens throughout his lifetime and continued to study botany until the moment he died on July 23, 1823.

William Bartram was born on February 9, 1739, in Kingsessing, Pennsylvania. He was an unassuming Quaker whose life can hardly be called adventurous, even though he was a man of many travels. From the very beginning, the greatest single influence that molded his life and character was his father John Bartram, who during his lifetime acquired the nickname "The greatest natural botanist in the world" from the great botanist Linnaeus, famous for creating the system for naming plants with Latin names. He had a twin sister Elizabeth. Unlike his father, who was an orphan with almost no schooling or opportunity for reading, Bartram grew up in a house with a good library and had considerable schooling. By the time he was able to read, his father had helped him to found the Darby Library and could borrow books from the Philadelphia Library Company. He was very skillful in drawing and painting. In Professor Barton's 1803 textbook, Elements of Botany, William Bartram's drawings made up most of the illustrations. Through this textbook, Benjamin Smith Barton established his reputation as one of the nation's preeminent botanists.

When Bartram was 14 years old, his father took him on an exploration journey to the Catskills and when he was 15 his father sent some of his drawings of natural objects to Peter Collinson, a Quaker merchant in England who was greatly interested in horticulture. The book that most appealed to Bartram during his adolescent years was John Josselyn's New England Rarities, which Josselyn asked him to read. He was very interested with the young Indian nymphs Josselyn wrote about in his book. His attitude was similar to that of this early writer, and he may have learned some of his method from Josselyn, but on the subject of Indian nymphs Bartram was much more poetic. William Bartram was never married, probably due to an unsuccessful love affair with his cousin Mary.

William Bartram was one of the foremost of the earliest generation of American writers on natural history and travel. He achieved distinction equal to, or greater than, his father's. He attended the Old College in Philadelphia but not much else is known about his education. During the early days of exploration there were no laboratories or museums to assist him in the identification of the plants and animals he found. There were also very few books obtainable for him. In 1791, William Bartram published an account of his Travels through North and South Carolina, Georgia, east and west florida, the Cherokee country, the extensive territories of the Muscogulges, or Creek Confederacy, and the country of the Choctaws(1958). This work contained an account of the soil and natural productions of these regions, together with observations on the manners of the Indians. This book was noted as a work of literature and an accurate account of natural and cultural history. It was widely read and appealed to the English romantic writers Coleridge and Wordsworth. It was a mixture of science and poetry in which he expressed his belief that man should use his environment wisely and never abuse it.

A famous English botanist and physician by the name of Dr. John Fothergill became interested in William Bartram's drawings in 1768. Dr. Fothergill and Dr. Chalmers are two important individuals who introduced him to some influential people and financed his exploration of the southeastern part of the United States that was to make him famous. William Bartram's Travels began with a description of his voyage from Philadelphia to Charleston where he was to meet Dr. Chalmers. Bartram's description of scenes at sea sets the tone of his book:

For the first twenty-four hours, we had a prosperous gale, and were cheerful and happy in the prospects of a quick and pleasant voyage; but alas! how vain and uncertain are human expectations! how quickly is the flattering scene changed! The powerful winds, now rushing forth from their secret abodes, suddenly spread terror and devastation; and the wide ocean, which few moments past, was gentle and placid, is now thrown into disorder and heaped into mountains, whose white curling crests seem to sweep the skies!

Like all his other writings this description of the scenes at sea are all written from experience and what he saw with his own two eyes.

William Bartram's writing had scientific aspects to it, but it also contained some of the earliest descriptions of the culture of both the Cherokee and Creek Indians. He recorded many observations in his personal journals and diaries during his walks in the woods, which inspired many noted authors, including Henry David Thoreau, William Woodsworth, and James Fenimore Cooper.

William Bartram and his father are considered pioneers in the fields of natural history that they investigated. They discovered hundreds of specimens, including the Venus Fly Trap, and a previously undiscovered tree which they named Franklin tree, after Benjamin Franklin. In 1782, Bartram was elected professor of Botany at the University of Pennsylvania, but he declined the position because of ill health. A few years later in 1786, he became a member of the American Philosophical Society and he was elected to other learned societies in both Europe and America. Thomas Jefferson asked Bartram to join Lewis and Clark in their exploration of the Louisiana Territory in 1803, but he declined, however, because he felt he was too old and frail for such a journey. Despite that, he explored more of America than any other scientist of his time. William Bartram and his brother established the first nursery in the U.S. and printed the first plant catalog. Bartram had made such a significant contribution to botany that The Bartram Trail Conference was established in 1976 in his memory. Its purpose is to identify the route that William Bartram took on his travels. The conference works to promote interest in developing public access recreational trails and botanical gardens within Bartram's route through the individual states.

William Bartram was at his niece, Mrs. Ann Carr's, home on the morning of July 22, 1823. He went to the study to write an article on the natural history of a plant. After he was done, he rose to walk in the garden and a moment later he was dead. Death came suddenly and kindly to 80-year-old William Bartram.