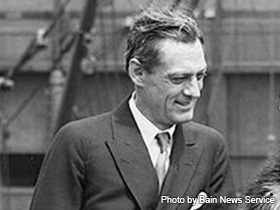 Lionel Herbert Blythe, born on April 28, 1878, in Philadelphia, Pennsylvania, was a member of the prominent Barrymore clan. Barrymore began his acting career as a child when he participated in several plays alongside other family members. Although an interest in fine art engrossed Barrymore for a few years, he eventually returned to the entertainment industry, performing in numerous films and plays. He received many honors for his roles, including an Academy Award for Best Actor. Barrymore also directed several films, in addition to publishing a novel and an autobiography. Barrymore's weakening health eventually necessitated the use of a wheelchair, but he continued to perform until his death on November 15, 1954, in Van Nuys, California.

Lionel Herbert Blythe was born on April 28, 1878, in Philadelphia, Pennsylvania, to parents Herbert Arthur Chamberlayne Blythe, an actor whose stage name was Maurice Barrymore, and Georgiana Drew, the daughter of actor John Drew. Blythe had two younger siblings who would also become famous, John and Ethel. All three Blythe children later changed their last name to Barrymore to follow in their father's theatrical footsteps. As a member of a family in the entertainment industry, Barrymore was involved in acting from a young age. At the age of six, he made his stage debut in one of his parents' plays, replacing another child actor who had fallen ill. His adolescence was spent at various private schools, including the Arts Student League of New York.

At 15, Barrymore was removed from school and sent on tour with his grandmother, actress Louisa Drew. After a successful performance in the play The Rivals, Barrymore was asked to perform in The Road to Ruin. In his early twenties, Barrymore acted in several plays including The Mummy and the Hummingbird, which garnered him critical acclaim. Barrymore went on to perform in The Other Girl, a comedy in which he played a prizefighter. In 1904, Barrymore married actress Doris Rankin. The couple had two daughters, both of whom died in infancy.

Despite his early stage success, Barrymore had little interest in becoming an actor, claiming in his book, We Barrymores, "I didn't want to act. I wanted to paint or draw. The theater was not in my blood, I was related to the theater by marriage only; it was merely a kind of in-law of mine I had to live with." Instead of aspiring to act, Barrymore decided to pursue his passion for art. In 1906, after the closing of his one-act play Pantaloon, Barrymore traveled to Paris to study art. His absence from the stage was short-lived; Barrymore returned to the United States just three years later to perform in the Chicago production The Fires of Fate. When the play was to be moved to New York, Barrymore suddenly quit the cast, later admitting to have a "nervous terror," a fear of public performances.

Around this time, Barrymore took an interest in D.W. Griffith, the legendary director who would go on to film Birth of a Nation, the longest and most expensive film of the day. Griffith had a movie-making business at the American Biograph Studios in New York City. Barrymore applied for a job with the company and was hired, which allowed him to become involved in films as both an actor and as a writer. His first acting role was in Fighting Blood (1911), a film that was only 18 minutes long. He went on to star in more than 60 silent films with the D.W. Griffith company, including The New York Hat, which starred actress Mary Pickford, and Judith of Bethulia, a story based on the Bible's Book of Judith. In 1914, D.W. Griffith moved his company to California, but Barrymore chose to continue making films in New York.

In 1917, after much prompting, Barrymore returned to the stage as Colonel Ibbetson, in Peter Ibbetson, acting alongside his brother John. A New York Times review of Lionel Barrymore's return to the stage called the performance "arresting and ingenious...an admirable thing." Barrymore followed this role with another play, "The Letter of the Law." Alexander Woollcott, reviewing the play for The New York Times, called Barrymore's turn as a ruthless judge "a performance of consummate skill." Barrymore next turned to the silver screen, starring in The Copperhead (1920), which the late Heywood Broun of The New York Times proclaimed "the best piece of acting I ever saw."

Barrymore's string of successes ended when he took the lead role in a stage production of Macbeth. Peters, in her biography of Barrymore, labels the play as "that season's--that decade's--most spectacular failure." The negative reviews served as Barrymore's justification to return to the screen. Before he gave up the stage for good, however, Barrymore performed in The Claw, where he met and fell in love with Irene Fenwick. In 1922, Barrymore divorced his first wife, Doris Rankin, and, seven months later, married Fenwick.

With negative reviews ringing freshly in his ears, Barrymore decided to forgo further stage productions and focus strictly on his film career. In 1925, Barrymore moved from New York to California, where he signed a contract with Metro-Goldwyn-Mayer Pictures. He made his debut in talking pictures in 1928 in The Lion and the Mouse. Mordaunt Hall's review of the film argued that Barrymore's "knowledge of diction, linked with his splendid acting, overwhelmed the other players." During his first years at MGM, Barrymore directed as often as he acted. Although he received honors for his work behind the camera, such as a 1930 Best Director Oscar nomination for Madame X, a film in which a son must unknowingly defend his mother in court, it was his performance in front of the camera in A Free Soul that earned Barrymore the 1931 Academy Award for Best Actor. In the film, Barrymore plays Stephen Ashe, an alcoholic attorney who successfully defends a mobster in a murder trial, only to end up defending the mobster's murderer, who happens to be his daughter's boyfriend.

The 1930s proved to be a productive period for Barrymore—he appeared in at least five films each year of the decade. Barrymore played character roles in most of these films, a result of his aging and changing appearance. These character roles usually had Barrymore playing characters much older than his actual age, ones that often required heavy makeup. One such film was Rasputin and the Empress (1932), also notable as the only time all three Barrymore siblings were united on screen. In 1933, Barrymore began a tradition of performing as Ebenezer Scrooge in a radio production of A Christmas Carol, a practice he continued annually until his death.

Barrymore's second wife, Irene Fenwick, died in 1936, and two years later arthritis and a hip injury necessitated Barrymore's use of a wheelchair. Ailing health and a tragic loss did not stop Barrymore's film career; in fact, his disability was written into later screen performances like his role as Dr. Leonard B. Gillespie in the popular Dr. Kildare film series. Barrymore's next famous role was as the villainous banker, Mr. Potter, in It's a Wonderful Life (1946), starring alongside James Stewart. Barrymore's final memorable performance was in 1948's Key Largo, which also featured Humphrey Bogart and Lauren Bacall. By the end of the 1940s, Barrymore's injury and personal losses were beginning to take a toll. MGM was forced to pay Barrymore a weekly allowance when he proved incapable of managing his own finances and he had to move in with his late wife's relatives when he could no longer take care of himself.

In the midst of his acting career Barrymore found time to cultivate his musical talents. His achievements as a composer were noteworthy: the tone memoriam he composed for his late brother John was later performed by the Philadelphia Symphony Orchestra. Barrymore was a prolific composer, writing more than 100 unpublished pieces. Among his more notable compositions were the "Tableau Russe" and the theme song of the radio presentation "Mayor of the Town."

In addition, Barrymore was recognized for his artistic talent when some of his etchings were included in the "Hundred Prints of the Year," and he was elected to the Society of American Etchers. Barrymore further diversified his talents by writing both a historical novel, Mr. Cantonwine: A Moral Tale, and an autobiography, We Barrymores.

Barrymore left behind his catalogue of artistic, theatrical, and cinematic achievements on November 15, 1954, when he had a fatal heart attack. Barrymore, who died in Van Nuys, California, was buried beside his wife, Irene Fenwick, and his brother, John Barrymore, at The Hollywood Calvary Cemetery. He was posthumously awarded a star on the Hollywood Walk of Fame at 1724 Vine Street for his work in motion pictures.