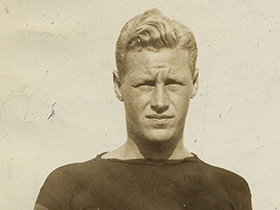 The epitome of sportsmanship in early college hockey, Hobey Baker was born in Bala Cynwyd.

Hobart Baker was born in Bala Cynwyd, Pennsylvania, in 1892. He was a well-rounded athlete and chose to play professional ice hockey following his graduation from Princeton University. Known for his admirable sportsmanship, Baker was well liked by all who knew him. He served in the United States military as a pilot in the army during World War I. Baker was killed in France shortly after the war ended.

Hobart "Hobey" Amory Hare Baker was born outside of Philadelphia in Bala Cynwyd in 1892. He is the son of Alfred Thornton Baker and Mary Augusta Pemberton. His father was an upholstery manufacturer while his mother was a socialite. He attended St. Paul's School, a prestigious Episcopal school in Concord, New Hampshire, between the ages of 11 and 18 and excelled both academically and athletically. Baker played ice hockey, the school's most prominent sport, football, and baseball while in New Hampshire.

Following his graduation from St. Paul's, Baker attended his father's alma mater, Princeton University where he majored in history, economics, and politics. Ineligible to compete his freshman year, Baker was forced to forgo the hockey season his first year at Princeton. Known as "The Wonder Player of Hockey," Baker led his ice hockey team to two championships during his three eligible years at Princeton. He was also a versatile player for Princeton's football team, occasionally scoring field goals over 40 yards long and running in for touchdowns. Baker was prohibited from playing more than two varsity sports at Princeton, a policy that cut his baseball career short. Even more than his playing ability, Baker was known for his sportsmanship. He was only penalized twice while playing collegiate hockey and often visited with the opposition following games. He was well liked by his teammates and opponents alike. He brought crowds to their feet. Jeffrey Hart, an English professor at Dartmouth College and founder of The Dartmouth Review, said Baker was "probably the most charismatic athlete of all time." Baker continued to play hockey after his college graduation, playing for the St. Nicholas Club. He also worked as a trainee for the J.P. Morgan bank during this time.

Upon the United States' involvement in World War I, Baker trained as a pilot in the army. His plane was painted orange and black in honor of Princeton's school colors. Baker married Mimi Scott and shortly after became a captain and commanded the 141st Aero Squadron in France during the war. Just weeks after the armistice ended World War I in 1918, Baker was killed in a plane crash when his Spad XIII stalled in mid air near Toul, France, on December 21 after receiving orders to return home. While serving in the military, Baker received the French Croix de Guerre and the US Distinguished Service Medal.

Today, the NCAA annually awards the Hobey Baker Memorial Award to the top collegiate hockey player in the United States. NCAA Division I head coaches cast their ballots for the six players they deem the best, three from their league, and three in the nation. Ten finalists are determined and a panel determines the outcome by taking into account the player's character both on and off the ice, integrity, skills, sportsmanship, and academic achievements. It has been won by numerous National Hockey League standouts, including Paul Kariya, Brendan Morrison, Chris Drury, and goaltender Ryan Miller.